Would a cardboard traffic officer fool you into slowing down?

A cardboard cut-out traffic officer is one of the latest weapons used by councillors in the UK to fight the battle against speeding motorists.

This is what some residents in Edinburgh have been offered after they complained to their local council about motorists continuing to breach 20mph limits in their area.

So now the residents of Eglington Crescent, in Edinburgh have the privilege of using one of four ‘Pop Up Bob’ cardboard cut-outs to deter motorists from breaking the speed limit. 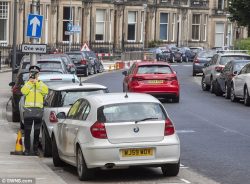 Meet ‘Pop Up Bob’ – a cardboard cut-out traffic officer, would he make you slow down? © Copyright SWNS.com

The cardboard figures emulate a traffic officer in uniform holding a speed gun pointing at oncoming traffic and will be on two to three-week deployments in order to enforce the 20mph limits.

The City of Edinburgh Council are pretty happy with their pretend traffic officers and see them as a useful road safety tool but others don’t share the same enthusiasm for the cardboard cops.

They’ve been labelled a ‘token gesture’ by Labour councillor Gordon Munro, who also questioned how effective they will be in slowing motorists down once they realise they’re just a cardboard cut-out.

“We pay £2.6million for 54 extra police for our city,” said Cllr Munro, adding: “Surely this could be one of the tasks set for the 54 police we’re paying for? Unless we’re getting cardboard cutbacks in return for our money?”

Councillor Munro also said: “I would’ve thought if it was a true partnership they would be supporting it with policing. Real police is what will inhibit driving.”

The advice that comes with a ‘Pop Up Bob’ is to prop him up outside on ‘alternate days’ so hopefully motorists will think he could be the real deal.

Superintendent Mark Rennie said: “Alongside high-visibility patrols and safety cameras, the ‘pop-up Bob’ prop is used in areas to help deter speeding and is a visual reminder to drivers to make sure that they drive in a responsible manner.”

Apparently, Pop Up Bob is not a replacement for real police officers but merely a tool to be used in the fight against speeding in areas where it’s become an issue.

However, a number of residents in the Haymarket part of Edinburgh are using social media websites to knock the idea of these cardboard cops.

‘I don’t think he’s cut out for the job,’ wrote one resident, whilst another one joked: ‘This is a perfect late night p****d up thieving for any local student. Brilliant ornament for any student flat.’

One person did however think they might be successful but only short-term, writing: ‘I can see how this would actually work, for a short time anyway. I doubt that you would find many drivers who don’t check their speed when they see a yellow jacket.’

“Pop Up Bob” is part of a new toolkit of activities and resources that are available online to help communities encourage more healthy behaviour and responsibility and to reduce speeds in problem areas.

“Our 20mph toolkit is about giving communities the resources to encourage and support safer speeds amongst the people who live there or travel through,” said Transport and Environment Convener, Councillor Lesley Macinnes, adding: “We know many people in Edinburgh support 20mph so it’s really important that we help them to spread the word.”