The two naughty birds knowns as ‘George & Agnes’ have a particular liking for windscreen wipers!

A woman who lives in Newark, Nottinghamshire repeatedly has her car vanadlised as well as her property but they’re not your typical offenders – these two ‘evil’ vandals are of the feathery kind!
For three years now, 78-year-old Brenda Brown has had to put up with two crows wreaking havoc around her home, pecking at the windows and causing damage to her car and the naughty birds appear nearly every day.
The two crows have been named after her deceased parents “George and Agnes” but Brenda says the birds are “frightening” and are costing her a small fortune as they seem to have taken a liking to the windscreen wipers on her Range Rover.
According to a bird trainer, Lloyd Buck, the actions of the two crows is “nothing sinister”. 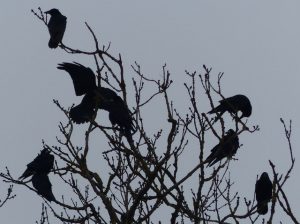 Woman’s car vandalised by ‘evil’ crows who also peck at her house windows © Copyright Mat Fascione and licensed for reuse under this Creative Commons Licence.

When Ms Brown spoke about the birds she described the first time they appeared, saying that one looked at her through the window and his eyes looked so evil but he didn’t fly away and carried on looking at her, which she said was quite frightening.
The ‘evil’ pair have taken a particular liking to Ms Brown’s car and have managed to tear off the windscreen wipers four times. The terrible two have also pecked away at the rubbers seals around the windows and have even had a go at the wing mirrors.
“Next door had the same colour car but they never touched that and they never banged on their windows,” said Ms Brown, adding: “I don’t know what they’ve got against me”.
The birds wake Ms Brown up sometimes at four o’clock in the morning by pecking at the windows which sounds really loud.
Despite Mr Buck saying this was an “extreme case”, their actions are not unusual and they could simply be reacting to their reflections in the mirrors and windows on Ms Brown’s car.
“They think there’s another crow in their territory,” said Mr Buck, adding: “When something doesn’t go away that they don’t like, they peck the ground or anything nearby in anger”.
To stop the crows from damaging her Range Rover, Ms Brown has covered the windows and mirrors but not even this helps.
Ms Brown says she now has a love-hate relationship with the two naughty birds. If one day they don’t turn up she wonders where they are.

Please click here to find out more about our car leasing services and amazing deals, or call us today on 0800 311 8290.