Drivers in the UK are suffering from more punctures these days, with potholes partly to blame

Drivers in the UK are suffering from more punctures these days with potholes partly to blame, however, it seems that just over a third of new cars on sale today come with a spare wheel as standard.
Following an investigation, it’s been found that drivers are suffering from over 30,000 punctures a month on average and the state of our roads which are covered in potholes aren’t doing much to help the situation.
The RAC claims that pothole-related callouts have increased by 110% over the past few months. In 2017, out of all the breakdown assistance requests the company received from callers, 352,619 were because of flat tyres – this equates to around 30,000 punctures per month, or 1,000 per day! 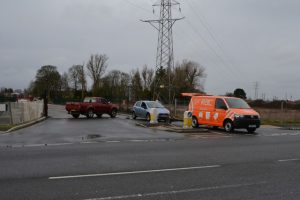 Drivers in the UK are suffering from more punctures these days with potholes partly to blame © Copyright Lewis Clarke and licensed for reuse under this Creative Commons Licence.

Already in 2018, the RAC has been called out to 127,726 callouts because of flat tyres. Even more surprising is that 50,402 (40%) of them had asked for assistance because their vehicle didn’t seem to have a spare wheel.
When a flat tyre situation has arisen and the boot opened to look for a spare wheel, 62% of new car drivers found there wasn’t one.
Because of this, the RAC and other breakdown assistance companies now carry a universal space saver spare wheel just in case.
According to recent analysis by What Car?, only 8% of new cars available in the UK now have a full-size spare wheel in the boot, whilst 30% now have the smaller space-saver spare which has been designed as a short-term solution.
This allows the driver to travel at speeds up to 50mph but must be replaced with a full-size wheel and new tyre as soon as possible.
Most car manufacturers now provide puncture repair kits or run-flat tyres – they’re cheaper, take up less space and are much lighter to carry, making them better for fuel economy whilst keeping vehicles emissions as low as possible.
Back in 2010, the RAC dealt with 29,371 ‘puncture no spare’ callouts and by 2017, this figure had increased by a whopping 335% to more than 127,000.
They claim there’s been an increase in callouts this month of around 10% and expect to see a total of more than 34,000 flat-tyre problems dealt with in May alone, with ‘puncture no spare’ callouts possibly reaching 14,000!
According to Pete Williams, an RAC spokesman, a lot of drivers have no idea there’s no spare wheel until an issue arises.
Mr Williams believes that whilst many new cars now come equipped without a full-size spare wheel, the rate of punctures have also increased because of the state of our roads.
“The sustained period of cold weather right up until just a few weeks ago has wreaked havoc with our road surfaces,” added Mr Williams.
When the RAC analysed their figures, during the first quarter of 2017 jobs relating to punctures and tyre issues averaged 936 a day or 28,392 per month.
During the same period this year, such jobs were up 14% to an average of 32,253 per month – another 139 tyre related callouts per day to deal with.
Luckily, the RAC and other breakdown providers now carry a universal space saver wheel to help stricken motorists. This enables the driver to take their vehicle to their nearest tyre centre whilst they arrange for a replacement. The universal space saver wheel is then picked up later by one of the breakdown providers patrol vehicles.

Please click here to find out more about our business/personal car leasing services and fantastic deals, or give us a call NOW on 0800 311 8290.