Warning to motorists about parking on the pavement

If you get caught parking on the pavement in Sutton Coldfield, Birmingham, you might be hit with a £100 and three penalty points and this type of action might make it’s way to your area soon.
Road traffic police in Sutton Coldfield have introduced a new special operation to deal with motorists who park in a dangerous way.
The operation has been called ‘Park Safe’ and will concentrate on the Boldmere, Walmley and Wylde Green areas of Sutton Coldfield, in Birmingham.
So far, 117 motorists have been prosecuted since the operation began in December last year. 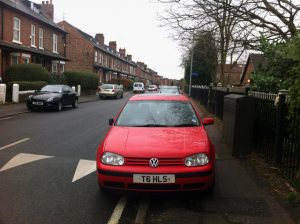 Warning to motorists about parking on the pavement © Copyright Phil Champion and licensed for reuse under this Creative Commons Licence.

The operation follows complaints made by locals about repeat parking offenders in the area who continuously block driveways, park on street corners and in a drivers line of sight at junctions.
Any driver caught “leaving their motor vehicle in a dangerous position” could face a fine of £100 and three penalty points on their driving licence.
According to Section 22 of the Road Traffic Act, it’s an offence to leave a vehicle in a dangerous position to other road users, including on footpaths and depending how severe the offence is, drivers could be fined up to £1,000.
The rule for parking on a pavement is that you should leave enough room so that a wheelchair or double buggy can get passed easily, if not then the driver is committing an offence and could be punished.
If a vehicle is found parked in a dangerous position and the driver of the vehicle can’t be traced, then the vehicle will be removed and the owner will have to pay for the recovery of the vehicle, as well as receiving a fine and possibly penalty points.
Offending vehicles can be detected quickly, photographs and number plates taken and the rest is done back in the office in just 10 minutes.
As part of the operation, motorists will be handed out leaflets warning them of the dangers of parking in a bad way, which could endanger other road users and pedestrians using the pavements.
Neighbourhood police teams across the West Midlands are to be trained up so they can run dangerous parking operations by themselves within their own areas.
The operation is all about trying to encourage drivers to change their habits, especially when it comes to parking and to think about others to avoid dangerous situations.

Please click here to find out more about our car leasing services and amazing deals, or call us today on 0800 311 8290.