and during the school run using AI technology

Motorists in the UK will eventually have to pay a higher price for fuel over a bank holiday weekend and doing the school run thanks to AI technology.
These AI (artificial intelligence) computer programs will have the ability to charge motorists in the UK more at the pumps during busy times of the day and are set for use by supermarket giants across the country within a matter of months.
Many of our major supermarkets are speaking with the company behind the technology, a2i Systems, which are based in Denmark. 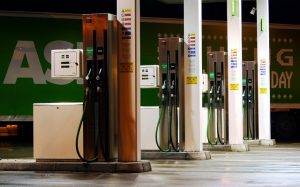 UK supermarkets to increase fuel prices on bank holidays and during the school run using AI technology © Copyright Rossographer and licensed for reuse under this Creative Commons Licence.

British drivers could see several price changes during the day, falling or rising by around 2p a litre, which equates to about £1 per tank.
The technology is already used by thousands of firms throughout Europe and the US, where it’s been known for the price to change as much as 10 times in one day.
An algorithm which has been shaped on the human brain is what makes this technology work. It combs through massive databases holding customer information to figure out how we each behave as individuals.
The computer may notice that stores are particularly quiet at a certain time of the day, so drop the price at the pumps to entice people into their store.
If however, the computer detects an extremely busy petrol station, such as in the morning when it’s school run time, or over a bank holiday weekend, the price at the pumps could increase.
According to a fuel analyst from the AA, Luke Bosdet, this change could result in unfairness for those who are travelling over the holiday period to visit relatives, leaving motorists agitated knowing that prices can be raised or lowered by retailers.
“This way of petrol pricing is completely new to the UK. Currently prices are very competitor focused rather than being focused on the behaviour of customers,” said Martin McTague, from the UK division of a2i.