According to new figures released by Highways England, taxpayers in the UK are picking up an £8 million bill for cleaning up roadside litter, money which the agency believes could be better spent elsewhere, such as filling in the huge number of potholes found on numerous roads up and down the country.
Around 550 sacks of rubbish are collected each day from the side of UK roads, costing £40 per sack, the same price it would be for filling in a pothole. 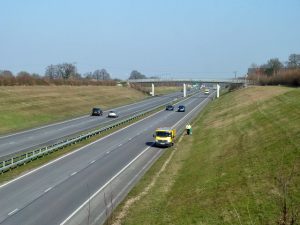 Taxpayer picking up £8 million bill for roadside litter © Copyright Robin Webster and licensed for reuse under this Creative Commons Licence.

If drivers across Britain simply stopped littering the streets and took their rubbish home, money being wasted on litter picking would be used for more important road maintenance issues such as fixing potholes.
In some areas of the country, the problem has now become so serious that many stretches of road are now known as ‘litter hotspots’.
A grand total of 7,000 bags of rubbish have been collected from the following 25 areas up and down the country since January this year, many of which are just a junction or single slip road.
Top 25 Litter Hotspots here in the UK:
M11 J9-6, M25 (A3 spur), M6 Corley Services, M62 J25-26, M602 J3, M1 J6-10, M5 J3, M6 Hilton Services, M62 J33, M62 J12-11, M1 J38-39, M25 J3, M2 J2-3, M4 J19-16, M65 J4-5, M1 Donington Services, M25 (A1089 spur), M621 J1-6, A38 Plymouth Parkway, M60 J24-23, M1 Trowell Services, M25 (A13 spur), A1(M) J10-6, M5 J18 and A2 Marling Cross lorry park.
According to a spokesperson from Highways England, a total of 200,000 sacks of rubbish are collected each year from the side of the road at a cost of £40 per sack – time and money spent on clearing up our roads could be better spent on more important issues such as fixing damaged road signs and filling in potholes.
“[Litter] is unsightly as well as a risk to wildlife and the environment, so we urge road users to take their litter home,” added the spokesman for the agency.
Campaigners however claim Highways Agency’s litter plan is not as effective as it could be. The founder of Clean Up Britain, John Read said: “As required by Section 89 of the 1990 Environmental Protection Act, Highways England has a statutory duty to keep the network clear of litter, but is visibly failing to do that.”
A prior investigation into the problem of roadside litter, discovered that 364,000 bags of rubbish were collected within a three year period, costing £14.5million, meaning the annual cost of litter picking has increased by 66% from £4.8million to £8million.
These figures could be a lot worse, as Highways England only look after A-roads and motorways up and down the country.
A report in 2015 by the DfT, claims the actual roadside litter collecting bill for taxpayers could be a lot higher once you include local roads.