A clever idea already being used in areas of London

One of the biggest issues concerning electric cars and the reason why the uptake of EVs in the UK is slow is more often than not blamed upon the poor charging infrastructure throughout the country.
The capital and other large cities including Birmingham and Glasgow still don’t have enough charging points for the public to use and for the EV market to grow.
Many motorists who’ve made the switch to an electric vehicle are left feeling frustrated with the current charging stations – they’re often hit with reliability issues, plus there’s multiple socket types and then there’s the struggle to find a station that’s unoccupied. 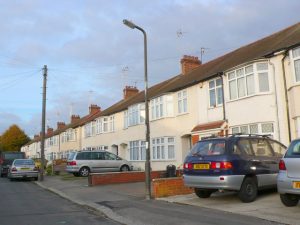 All these problems could now become a thing of the past thanks to one component – a new smart cable which simply plugs directly into street lamps and charges your EV.
The clever component has been designed by a German tech firm called Ubitricity and is already in use in some London boroughs, including Richmond upon Thames in south-west London from this week.
Street lamps in Barnes and Twickenham have also had sockets installed for residents, costing £1,000 each.
This is so far looking like a cheaper alternative to the guesstimate figure of £6,000 per charge point which are used at the moment in London.
Funding is also available for the conversions via the £2.5million ‘On-street Residential Charge point Scheme’, which local councils can apply to have a slice of through the Office for Low Emissions Vehicles.
According to the Highways Agency, there’s an estimated 7.5 million street lamps across the country, meaning this could be the perfect solution for EV charging, making plugging-in easier and more convenient for all EV owners, as well as helping to reduce the high levels of pollution in urban areas.
The new smart charging cable is simply purchased by the EV owner and holds all metering and billion information. This is then sent to the user’s mobile electricity contract.
As soon as your council has approved the use of the new cable, the existing panel on the street lamp is taken off, a socket installed and a new cover attached. The structure of the street lamp isn’t changed or altered in any way – no need for a stand-alone unit, totally space saving, no on-going installation costs and no more waiting around for other EV users to finish charging their vehicle.
It takes less than 30 minutes to install the socket and only 3 minutes to remove it if necessary, said one of the brand’s spokespeople.
A number of London boroughs have already taken up the initiative and street lamp conversions have begun in many busy areas. Richmond Council is hoping to provide ‘lamp column chargers in residential roads across the borough for both businesses and residents’.

To find out more about our car leasing services or fantastic deals please click here, or call us on 0800 311 8290.