Splash a pedestrian with your car if you dare!

Speeding through a puddle that splashes a pedestrian might seem like a fun thing to do at the time but doing so could land you in hot water with the law.

A huge fine could be handed out to any motorists caught driving through a puddle which splashes a pedestrian walking by.

It states under British law that splashing someone whilst driving is an illegal act and if caught breaking the law, you could be fined up to £5,000.

Splashing a pedestrian whilst driving through a puddle falls under section three of the Road Traffic Act 1988 that relates to driving “without reasonable consideration for other persons.” 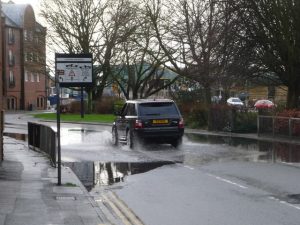 Splash a pedestrian with your car if you dare! © Copyright Chris Downer and licensed for reuse under this Creative Commons Licence.

If a driver is pulled over by the police for breaking the law, they could be hit with a £100 fixed penalty notice and given three points on their driving licence but if the case ends up in court, the fine could jump to £5,000.
As well as the fine increasing if the case goes to court, the offender could be disqualified from driving for a period of time and receive from three to nine points on their licence.

On January 4 this year, an incident occurred involving a driver, large puddle and three pedestrians in St Ives, Cambridgeshire, which the police are now investigating and looking for information to help them find the offender.
The pedestrians were a mother with her two young children but this didn’t stop the motorist from driving straight through the 20-ft long puddle which soaked the mother and her two children, one of which was in a push-chair.

Apparently the puddle was easily visible and the motorist could have either waited to drive around the puddle or drive through it slowly but instead chose to drive through at normal speed, leaving the three pedestrians soaked wet through.

So remember, not matter how tempting you might find it to drive through a puddle and watch pedestrians’ reaction, you are breaking the law and could be faced with a huge fine of up to £5,000.

Please click here to find out more about our car leasing services and special deals, or give us a call today on 0800 311 8290.