Smart motorways without a hard shoulder are putting motorists at risk

The RAC has warned that getting rid of the hard shoulder on busy sections of new ‘smart’ motorways across the UK means that lives will be put at risk.
According to the breakdown recovery company, over half of motorists have no idea where to go, or what to do if they break down on a section of smart motorway.
To ease congestion, the hard shoulder is used as a ‘live’ lane, despite the fact that these kind of lanes can create a 200% higher risk of accidents and collisions. 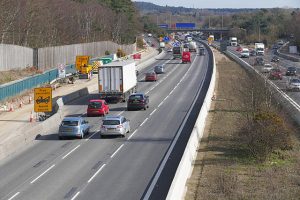 Over 300 miles of the UK’s busiest motorways are set to have their hard shoulder scrapped and turned into an extra lane within the next nine years.
Refuge areas are now designated places for motorists to use, which are essentially an emergency lay-by located along the road every one and a half miles but according to a recent survey, they’re almost three times further apart than many drivers think is safe.
The RAC carried out a survey and questioned 2,000 drivers and discovered that an astonishing 52% had no idea what an emergency refuge area was.
The RAC concluded that their findings were most disturbing and highlighted the confusion that these refuge areas had caused amongst motorists – 64% of those questioned were not sure what they should do after stopping, whilst 65% were unsure on how they should rejoin the road afterwards.
According to the RAC, only one motorist taking part in the study knew that they had to contact Highways England if they wanted to rejoin the motorway when the hard shoulder was being used as an extra lane for traffic.
All the other drivers who took part assumed that they simply waited for a gap to appear in the traffic before pulling in as quickly as possible.
As part of a separate study by the RAC, they discovered that only 42% of motorists who had to pull up because of a car issue had managed to reach one of the emergency refuge areas.
Chief engineer at the RAC, David Bizley, said it was vital that all motorists in the UK learn how to use an emergency refuge area for their own safety and that of other drivers.
Safety concerns regarding the abolition of the hard shoulder were brought up by a cross-party committee of MPs last year, who claim that all-lane running was simply a cheap way of reducing congestion, which could result in more serious accidents occurring on our roads.

Please click here to find out more about our car leasing services and special deals.