Skoda are this week celebrating their 1,000,000th SUV rolling off the production line.

They built their first ever SUV, the Yeti, back in 2009 and now they’re celebrating the production of their one millionth Skoda branded SUV.

Skoda are one of a number of mainstream brands who these days like to offer a fine selection of SUVs to motorists all over the world and the Skoda SUV marker was the Karoq 1.5 TSI 150 which was Emerald Green in colour.

This is amongst one of the almost 88,000 Karoq that Skoda have built so far, however it’s got a long way to go before it has a chance of catching up or ever beating its predecessor the Yeti, as 684,513 were built. 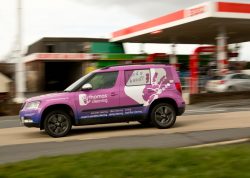 The Yeti appeared back in 2009 and was Skoda’s first ever SUV. © Copyright Roger A Smith and licensed for reuse under this Creative Commons Licence.

More than 215,000 Kodiaq have been built by Skoda, whilst almost 12,000 Kamiq have also been made for the Chinese-market.

Of the 1,000,000 Skoda SUVs to roll of the production line, an impressive 100,000 and more have made their way to the UK, which shows how much the Brits like the Skoda crossovers and the firm have said there’s plenty more where they came from.

According to Skoda, the SUV is an integral part of their 2025 Strategy: “We are currently taking the necessary measures to continue meeting the growing demand for vehicles in this segment in the future,” said production board member Michael Oelkeklaus.

The firm plans to expand their plant in Kvasiny, a village in the Czech Republic, into an SUV centre of excellence, where the Karoq will be built at two separate sites to keep up with demand, whilst production of SUVs will also occur in China, Germany, India and Russia.

In 2019, Skoda will launch their new small SUV which was previewed by the Vision X concept (2018) and is set to be a bigger hit than the Karoq and become one of their best-selling models.