The push for cleaner motoring in Britain continues..

According to recent reports, Royal Dutch Shell are planning to open the first ever ‘no-petrol’ filling station in the UK some time next year.
The push for cleaner motoring in Britain means companies like Shell are looking to move away from fossil fuels and with the Government announcing in the summer their intention to ban the sale of new petrol and diesel cars by 2040, the push for cleaner alternatives is gathering pace.
A site in central London has been allocated for the first ‘no-petrol’ station however the project is still in its early stages. The buildings will also be powered by solar panels positioned on the roof of the forecourt. 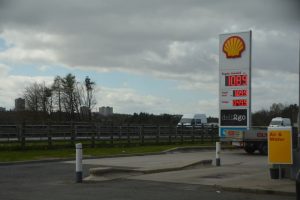 Shell announce plans for first ever ‘no-petrol’ filling station in the UK © Copyright Lewis Clarke and licensed for reuse under this Creative Commons Licence.

The new ‘no-petrol’ station will instead offer biofuels, electric vehicle charging points and hydrogen cell refuelling rather than petrol and diesel pumps.
The forecourt will also be advertised as more of a retail destination for its customers, offering top quality food, coffee and super fast WiFi.
Shell are aiming to be the company leading the way in alternative fuels and earlier this year they opened their first hydrogen cell refuelling station in the UK on the M25 at Cobham, with plans to introduce high-speed electric vehicle charging points across many of its 400 service stations up and down the country later in the year.
The electric vehicle movement is predicted to gain in popularity within then next 10 years and according to the latest research, motorists from London in particular have shown a keen interest in the new technology, making the capital the best location for Shell to open the very first UK ‘no-petrol’ station.
The motoring industry is paving the way for a much greener and cleaner future here in the UK and around the world.