Compared to other countries, personalised number plates are extremely popular here in the UK and many of us think it shows other road users how well we’re doing, whilst others simply enjoy the fun of having their own name or initials on their brand new vehicle.
However, this year’s searches have proven slightly surprising and a little disturbing, as quite a few car owners looked up the word ‘F**K’ – turning out to be a more popular search than nice plates containing the words ‘MUM’ or ‘DAD’.
The new ’67’ number plate arrived on our roads last Friday (September 1) and along with it came a large number of rude and offensive registration number/letter combinations that the DVLA had to ban so as not to cause offence to anyone. 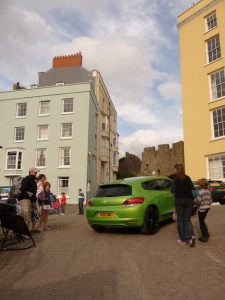 It seems car owners prefer swear words on their personalised number plate rather than nice ones such as ‘MUM’ – This number plates lives in Tenby and has the reg ‘TE10 NBY’ © Copyright Chris Downer and licensed for reuse under this Creative Commons Licence.

Some not so nice combinations excluded from public viewing this time around included such number plates as ‘DO67 SHT’, ‘OR67 ASM’ and ‘BA67 ARD’ to name just a few, as around 300 combinations in total had to be banned by the DVLA before the new ’67s’ came into effect.
Any number/letter combination that could be deemed as being offensive for political, racial, homophobic or religious reasons, or that could be classed as rude or explicit, are banned from ever being allowed to be used on a vehicle by the DVLA, who twice a year have the task of making sure these type of number plates don’t make it onto our roads.
Despite this, car owners are not put off and continue to search for the most ridiculous number plates they can come up with and even those thinking of purchasing a personalised number plate can’t get away with it.
DVLA release a list stretching to around 10 pages long twice a year of number plates deemed unsuitable for use on vehicles here in the UK but occasionally, the odd one slips through the net.
If such a number plate is brought to their attention, they have the authority to be able to take the registration plate off the owner and the same applies to personalised registration plates.
National Numbers have looked at over 4.5 million searches this year on their website and discovered that swear words were more popular than the usual favourites such as football clubs and monikers.
The number plate dealers found that ‘F**K’ was searched for 40% more than the word ‘MUM’, with around 2,081 looking up the swear word – an alarming 600 more searches than ‘MUM’!
A few more curse words also proved more popular than ‘MUM’, including ‘C**T’ with 1,790 searches and ‘DICK’ on 1,424 searches.
As well as a rise in the number of not so nice word searches, other odd look-ups have been spotted. Ninety-three people searched for a number plate with the word ‘TRUMP’, whilst 100 people showed interest in owning a plate containing the word ‘BREXIT’.
Despite a growth in swear word searches and odd ballers, Liverpool fans remain the most supportive of all, with 2,499 searches for ‘LFC’, compared to just 82 for ‘LCFC’, even though Leicester City won the Premier League in the 2015/16 season.
Name searches have always proved popular with car owners and over the last twelve months, the name ‘BEN’ was the most searched for on 5,318, followed by ‘JOE’ with 4,171 and ‘MAC’ in third place (3,261).

To find out more about our car leasing services and special deals please click here, or call us today on 0800 311 8290.