New rules announced by the Government this week will require motorway services and all major petrol stations in the UK to install electric car charging points.
During the Queen’s parliamentary speech, The Automated and Electric Vehicles Bill was revealed, requesting that the Government commit to improving the electric charging infrastructure across the country by installing charging stations on all motorway services and major fuel stations.
As part of the Bill, charging points must be easy to access and work smoothly across the UK and stick to the same set of operational and technical standards. 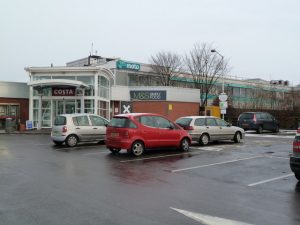 Petrol stations and motorway services set to be required to install charging points © Copyright Chris Allen and licensed for reuse under this Creative Commons Licence.

The new rules come after an investigation by Auto Express, who formerly focused on the public charging station infrastructure in the UK which is wrestling to keep up with EV uptake.
The number of motorists changing over to electric or plug-in vehicles has risen from 2,254 sold in 2012 to 85,983 by the end of 2016.
Despite the growth in EV sales, the number of charging points in the country have only increased from 2,883 found in 1,287 separate locations to 11,736 in 4,243 locations over the same time period – according to data gathered by Zap-Map, the ratio of EVs to chargers has risen from 0.78 to 7.32 in only four years.
What these figures tell us is that the current car-per-charger ratio is at risk of lagging behind European Union targets.
According to the European Parliament, there needs to be at least one charger to 10 cars on the road to ensure EVs become commercially viable.
A recent report by the Committee on Climate Change predicted that by 2020, Britain could have somewhere around 700,000 EVs on the road, meaning an extra 60,000 charging points are needed over the next three years.
However, Melanie Shufflebotham, director of Zap-Map estimates that the number of charging points will increase to only 30,000 found in 12,000 locations by the year 2022, even with Government funding of £600million to help boost the uptake of electric and plug-in vehicles here in the UK.
Director of the RAC Foundation, Steve Gooding, says it’s shouldn’t be just up to the Government to invest in the UK electric charging infrastructure, believing public investment is also required.
According to the Government’s Go Ultra Low campaign, over 90% of all EV charging is carried out at home and for motorists who travel more than the national 10-mile average, “charging infrastructure is growing rapidly”.

Click here for more information about our car leasing services and fantastic deals, or give us a call on 0800 311 8290.