Our Top 5 Most Haunted Roads In The UK 🧟

You Might Be Too Scared To Drive Your Lease Car Down Them After Reading This! 😱

Almost everyone has grown up listening to scary horror/ghost stories that have kept you up at night and been told about spooky things happening in old buildings because it’s said to be ‘haunted by a spirit’ but what about our roads here in the UK?  How many of us have heard of or even driven down the most haunted streets without even realising it?

Not many of us, I guess, as it’s not something most people tend to think about when behind the wheel. But it does seem that we have quite a few roads throughout Britain that are said to be haunted, so if you’re brave enough to continue reading, here’s our list revealing the Top 5 Most Haunted Roads in the UK and the story behind why they’re so scary – you might want to find an alternative route to your destination next time you’re in that area once you’ve finished reading though! 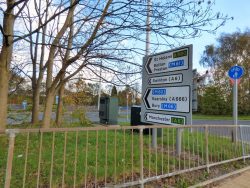 The slip road to everywhere, including the A666 known as the Devil’s Highway! © Copyright Gerald England and licensed for reuse under this Creative Commons Licence.

Our Top 5 Most Haunted Roads In The UK:

As you’ve probably already worked out, this major A road has been named the Devil’s Highway or the Devil’s Road because of its Biblical associations with the number 666 and for the high accident rate on the moors between Egerton and Darwen.

There’s been numerous reports of ‘dark shadows’ that lurk around at night, causing drivers to swerve or crash into other road users, so if you can avoid this stretch of road on a journey, do so!

You need to be careful when travelling down this road, as it’s reported to be one of the most haunted roads in the UK.

On 19 November 1965, three women were involved in a road accident at Blue Bell Hill after their Ford Cortina collided with a Jaguar. All three women were left severely injured and 22-year-old Susan Brown died five days after the incident from her injuries. She was due to marry RAF technician Brian Wetton. The two other women, Judith Lingham and Patricia Ferguson died soon afterwards.

Since the accident, several reports of ghostly sightings relating to what happened there have been told, with many claiming to have seen a lone female dressed in white stood at the side of the road, some of whom have even offered her a lift as she waited outside Lower Bell pub on the A229 and she’s gone on to give them an address. After getting into the car, the driver has looked into the rear view mirror only to find the woman has disappeared.

Other reported incidents include drivers believing they’d just run a girl over, with one male driver even going to the police station to report what had happened, only for the police to return to the scene and discover nobody there.

There’s been numerous reports of haunting goings on around the A75 road for over 50 years and is now thought to be Scotland’s ‘most haunted road’.

Apparently, a four-mile stretch of the A75 known as the Kinmount Straight between Carrutherstown and Annan is thought to be haunted. The main site of the alleged mysterious goings on have taken place in an area near Kelhead Plantation (an impressive row of trees) near Kinmount House, whilst other sightings have claimed to have been seen around the Swordwellrigg hamlet on the Annan bypass.

Back in 1957, a truck driver had to swerve to avoid a couple walking in the road but when he stopped to talk to them they’d vanished, whilst other stories tell of shadowy figures harassing drivers.

This is a fairly new road, having only been completed in 1987 to connect Sheffield to Manchester.

However, during construction, a number of eerie sightings of the paranormal kind were reported, turning it into one of the most haunted roads in Britain.

Around the time it was being built, it was reported that two security guards saw several sightings of children dressed in ‘old fashioned clothes’ dancing and laughing, however they mysteriously disappeared when investigated and some construction workers claimed to have heard children singing in the area during the middle of the night.

That same night, the guards saw a cloaked figure that also vanished. A few days later, one of the guards quit his job as the sightings had left him traumatised.

Even police officers have experienced strange goings on when asked to investigate, claiming their car was shaking and that a “man’s torso pressed up against the window”.

Further sightings have been reported over the years, with many drivers believing that children are playing around nearby electricity pylons or having to swerve to avoid bodies in the road – how creepy!

This all happens on a quiet country lane in Derbyshire close to Darley Dale. According to what people say and whether it’s true or not, the road is haunted by a headless horseman who first appeared back in the 1990’s. There’s also been sightings of ghostly peddlers, one of whom was murdered at Darley Dale, near Matlock and went on to haunt a different lane close to St Helen’s Church that’s now known as Ghost Lane.

There’s also been sightings of UFO’s and black panthers in the area, with people claiming to have seen UFO’s on nearby Darley Road.

It’s now a road that not even the locals like to use anymore and avoid if possible!

If you managed to make it through to the end, you’ve learnt about some of the UK’s most haunted roads that you can either choose to avoid driving down or lease a car from Flexed to travel to. That’s if you’re really brave and want to see or feel something scary and spooky for yourself this Halloween!

We have a hauntingly fangtastic range of new/brand new cars to choose from at spooktacularly low prices, so call 0800 311 8290 NOW or drop us a quick email to talk@flexed.co.uk

Please click here to find out more about our car leasing services and fantastic offers for both Business and Personal use, or give us a call TODAY on 0800 311 8290.