Our Top 10 Best Ever Driving Songs

Make Your Road Trip Even More Special With The Perfect Playlist!

I think it’s fair to say that most, if not all of us, enjoy listening to music. It’s there when we’re happy or sad and no matter what genre of music you love to play, it can brighten our day or soothe our heart.

From country to hip hop, rock to indie, classical to soul, we each of us know what kind of music we like to listen to and thanks to the internet, we now have millions of songs at our finger tips to enjoy whenever the mood takes us.

I’m old enough (sadly), to remember buying packs of blank cassettes and waiting for the Top 20 to come on the radio, fingers poised ready to press down the play & record button so you could listen later to your favourite songs but no one has to do that anymore, thankfully!

Nowadays, you don’t have to be at home if you want to crank out some tunes, you can walk and listen with your earphones in, sit anywhere and play songs through your mobile device or listen in the car as you drive along, which is what many of us do, especially on a long journey. 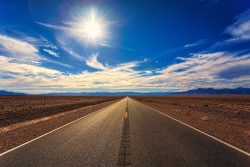 Our Top 10 Best Ever Driving Songs – Make that road trip even more special by creating YOUR very own playlist!

Gone are the days when all you had in your car was the radio. Now in more modern cars, you can play your own songs through your mobile devices, so you can sing along and dance to the songs you’ve picked.

One thing to bear in mind though when playing music on a journey, is not to play it too loud so as to disturb other people around you. If you stop for a period of time with your windows down, you might want to lower the sound.

It’s highly unlikely you’ll be punished for loud music if you’re driving along, as any disturbance to others will be for a short period, however, if police officers notice that you’re clearly distracted by the music, they can pull you over for careless driving which carries a £100 fine and three points.

Having said that, our Top 10 Best Ever Driving Song list includes some old favourites which have to be played loud – you can’t listen to ‘More Than A Feeling’ by Boston with the sound turned down low can you!

It also features a handful of my own personal favourites which I think are perfect driving songs but of course, my taste in music might not be the same as yours!

Making your very own playlist for a road trip is very exciting and can turn what could be a long and boring journey into something special and memorable.

Our Top 10 Best Ever Driving Songs (in no particular order):

This fantastic song by British rock band Whitesnake appears on every driving song list you come across and that’s because it deserves to be there. “Here I Go Again” was originally released on their 1982 album, Saints & Sinners but was re-recorded for their 1987 self-titled album and reached number nine on the UK singles chart on 28 November 1987.

During an interview, lead vocalist and co-writer of the song, David Coverdale, explained that the word “hobo” was changed to “drifter” so that it wouldn’t be misheard as “homo”.

2. NIGHT TRAVELER – Put Your Money On Me

A super catchy song from Austin duo Adam Fischer and Hunter Glaske. The band are currently working on their debut album which as a huge fan of their work, I’m really looking forward to.

Yet another awesome driving song from a British rock band. “Don’t Stop Me Now” featured on their 1978 album Jazz and was released as a single in 1979, once again reaching number 9 in the UK charts.

The song was written by lead singer Freddie Mercury, who sadly died much too soon in 1991 at the age of 45.

An American rock band that was formed in 1980. “Let The Day Begin” was released in 1989 and reached number one on the Billboard U.S. Mainstream Rock chart.

I’ve only recently found this song and so glad I did, just wish I’d stumbled upon it sooner – if this corker of a song came with instructions, it would say ‘play it loud’!

An American indie rock band from Philadelphia, Pennsylvania, that was formed in 2005. “Red Eyes” was released as a single in 2013 and features on the bands third studio album Lost in the Dream.

Turn it up and enjoy!

6. Boston – More Than A Feeling

The song was written by band member Tom Scholz and took him five years to complete. The combination of both an amazing song and the vocals of Brad Delp have turned this rock/bittersweet ballad into one of the best songs ever!

It was released as a lead single from their self-titled debut album in September 1976 and featured “Smokin” on the B-side.

This Canadian indie rock band was formed in 2009 and are based in Montreal, Quebec. “Favourite Boy” was released as a single in 2019 and features on their third album titled “A Blemish in the Green Light”.

I first heard this song only last week and can’t stop playing it.

A Southern rock band who released the song in June 1974. It was written by three of the group’s members, none of which were from Alabama – Ronnie Van Zant (lead vocals), Ed King (lead guitar, backing vocals – first “woo” at the end of the last chorus) and Gary Rossington (rhythm guitar – right channel, acoustic guitar – left channel).

The song reached number eight on the US chart in 1974 and features on their second album, Second Helping.

9. The Rasmus – In The Shadows

A great song from a Finnish alternative rock band. “In The Shadows” was released in February 2003 and reached number 3 in the UK singles chart.

This song is super catchy and loud, therefore it deserves to be played loud!

From the album of the same name, the single “Born To Run” was released in August 1975 and along with the release of another song from the same album, “Tenth Avenue Freeze-Out”, they helped ‘The Boss’ to reach mainstream popularity.

The song appears at number 21 on the Rolling Stone list of the 500 Greatest Songs of All Time and no wonder, it’s a cracker!