Our Top 10 Best Car Movies Of All Time

Most of us love nothing more than watching a great movie, either at the cinema with friends or a loved one or at home on the sofa, with a bucket of popcorn to nibble on and refreshing drinks to complete the night.

From romantic comedies to drama, thrillers, fantasy and horror, there’s a genre to suit every kind of mood and for those who love car action in their movie, there’s plenty of films both old and new that don’t disappoint when it comes to four wheel fun.

The motor car has appeared in films for decades and has even played the starring role in some movies such as the Herbie franchise which took a Volkswagen Beetle and gave it a mind of its own and could even drive itself! 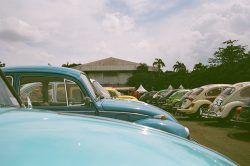 The much loved ‘Herbie’ from the Walt Disney films was always number 53 and you can see a tribute to this in the photo!

These days, most car enthusiasts and movie goers want to see super cars going exceedingly fast or two cars racing each other through busy streets as pedestrians jump out of the way in the films they watch and Hollywood certainly doesn’t disappoint.

The Fast and the Furious was released in 2001, an action movie that centred around illegal street racing, heists and spies. So popular was the film, it soon became a media franchise named Fast & Furious which has spawned eight movies in total, with a ninth film set for release in 2021 called F9.

At the opposite end of the scale, we have car films in which the whole story revolves around a particular style of racing. Days of Thunder was released in 1999 and stars Tom Cruise as a young race car driver who wants to make it big in NASCAR.

And if you’ve never seen it before, you need to watch Duel from 1971. I remember watching it for the first time when I was young and it frightened the life out of me – a mad tanker truck driver pursuing a lone man in his car across the Mojave Desert!

Obviously, we can’t talk about car movies without mentioning The Italian Job from 1969 and the three Mini Coopers in red, white and blue that were chased by the police on the rooftop of the Palavela in Turin and through the streets – one of the most famous car chases in movie history!

You’ve probably seen most, if not all of the following car movies at least once or possibly more than once if you love watching films with any kind of car action in it, whether that’s a chase, race or all out metal carnage. Whatever car movie you enjoy watching, I think we’ve covered every type in our list below and if there’s any you haven’t seen, why not make one night a week ‘Car Movie Night’.

Our Top 10 Best Car Movies Of All Time (in no particular order):

1. Days of Thunder (1999) – Tom Cruise and Nicole Kidman star in this film about a racer who wants to make a name for himself as a NASCAR driver.

If you love NASCAR and are a big fan of Mr Cruise, this film won’t disappoint as it features plenty of racing action on the track.

2. Duel (1971) – an American action thriller film in which a man driving a car ends up being taunted, chased and terrorised by a tanker truck driver all because he overtook him on the road a couple of times – so watch out!

Whenever David Mann stops in his car, the truck driver is there waiting for him, never giving up.

3. The Fast and the Furious: Tokyo Drift (2006) – the third installment from the Fast & Furious franchise, once again with plenty of fast car action, drift racing and high-speed crashes.

Sean Boswell is befriended by Han Lue who teaches him how to drift and introduces him to drift racing.

4. Gone in 60 Seconds (the original from 1974) – if you love car movies in which you get to see plenty of cars being wrecked, then this one’s for you.

Apparently, the film is known for wrecking and destroying 93 cars during a 40 minute car chase scene and in total, 127 cars were either damaged or destroyed throughout the whole of the film!

5. The Italian Job (1969) – three Mini Cooper getaway cars being chased down streets, along building rooftops and through tunnels is one of the most famous car scenes in a movie and turned the film starring Micael Caine into a true classic.

The red, white and blue Mini Cooper S cars are now on display at Bardney Heritage Centre in Lincoln.

6. Vanishing Point (1971) – a cult action movie that has ex-cop and race driver Kowalski delivering a souped-up car cross country to California after taking pills to keep him awake, so that he can deliver the white 1970 Dodge Challenger R/T 440 Magnum by 3:00pm on Sunday – the car only needs to be delivered by Monday but he has a bet with his dealer that he can get it there quicker.

The journey is filled with police chases and all sorts of road mayhem, with the driver of a Jaguar E-Type roadster challenging him to a race at one point but you’ll have to watch the film to find out what happens!

7. The Driver (1978) – it has Ryan O’Neal playing in the starring role as a man who steals cars to use as getaway vehicles after robberies that take place around Los Angeles.

The film features plenty car chase sequences, some of which occur during the night.

The film is based on the rivalry between Ford and Ferrari for the dominance at the Le Mans endurance race.

The final chase scene used 300 stunt drivers and had very little music playing in the background because the director of the film, John Frankenheimer, thought music and sound effects did not blend well.

10. The Cannonball Run (1981) – the film is based around a number of race teams who come together in Connecticut to take part in a cross-country car race.

As you can probably guess, the race turns into a rivalry battle amongst the teams, with the ambulance and the Ferrari being the two main rivals.