The number of disabled drivers in the UK drops by 80,000 in just two years

According to new figures, the number of disabled drivers in the UK has dropped by 80,000 in just two years.
In 2015, 1.35 million people were granted disability exemption for their vehicle tax and just two years on, this figure has dropped to 1.267 million.
This represents a 6% drop in the number of disabled people being granted exemption from vehicle tax since 2015.
There is no real evidence to show why the numbers have fallen in the last two years however, the new figures have provoked new criticism regarding the Government’s changes to disability benefits. 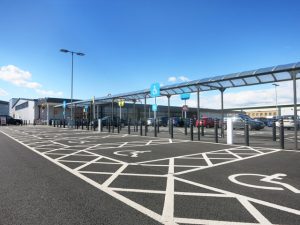 The number of disabled drivers in the UK drops by 80,000 in just two years © Copyright Des Blenkinsopp and licensed for reuse under this Creative Commons Licence.

The data was released by the Motability charity and reflects other statistics which show a drop in the number of people being fit to claim personal independence payments (PIP).
In 2013, disability living allowance (DLA) was replaced with PIP and since the change was made, 59,000 disabled drivers have lost their eligibility to have an adapted vehicle.
A total of 1,266,523 disabled people in the UK were granted exemption from vehicle tax as of February 2017, whereas in the same month just two years previous, this figure stood at 1,345,446.
The exemption can be claimed by disabled people if they are in receipt of the higher rate of the mobility component of DLA or PIP, as well as those with certain benefits for injured armed forces veterans.
Since PIP was introduced back in 2013, 51,000 disabled motorists have had their vehicle taken off them by the authorities and since it was changed from DLA to PIP, those eligible for the Motability scheme has dropped by half, from 254,200 to 127,900.
Campaigners and MP’s have requested changes be made to the Motability scheme, to stop vehicles being taken away from the owner’s until they at least have the chance to put in an appeal.
Out of the 51,000 repossessions, over 3,000 successful appeals have been granted by Motability.
According to the Department for Work and Pension (DWP), only a small number of PIP decisions are reversed and anyone taken off Motability qualify for financial support of around £2,000.
“You need it for mobility purposes and maybe you use it for work, but because you lose your PIP award you lose the car at the same time,” said one of the campaigners for fairer disabled rights, Conservative MP Peter Bone.
If a person appeals a PIP decision and it’s then overturned, you might be awarded PIP again but the vehicle has already been taken off you and in the mean time, this person could have lost their job as a result.