A new plan has been suggested to help reduce the level of air pollution over the city of Sheffield, which will only come into play when pollution is at a high level and during rush hour.
The proposed plan will see a 60mph speed limit introduced on the M1, in areas where the motorway passes close to homes and schools. The aim of the new plan is to reduce pollution and smog, particularly in these areas, and to improve the quality of the air.
The plan means a speed limit of 60mph would apply between 7am and 7pm from junctions 32 to 35a on the M1. This area of Sheffield suffers badly from air pollution. 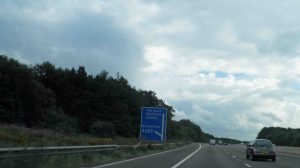 The city missed its EU air quality targets, and dangerously high levels of air pollution have been recognised in Sheffield by the World Health Organisation.
To make matters worse for the city, plans are underway which will see the M1 turned into a “smart motorway” in these areas – the hard shoulder would be available for vehicles to use, meaning an increase in the volume of traffic.
One worry concerning the new scheme, however, is that motorists will be left feeling angry when speeding tickets are being handed out to those caught exceeding the 60mph speed limit.
An AA spokesman says that many drivers will see that the speed limit is not related to safety and believe that they are being punished for emissions that could have been created by a mixture of other sources.
The proposed plan is just one option being trialled at the moment to help with air pollution in the city. Other such options include the use of pollutant absorbing substances along the side of the motorway.
It’s believed that the new trials are in response to the residents of Sheffield, who’ve shown real concern over air pollution levels in the city, with two schools already having to close near the M1 because of the air pollution levels being so high in the area.
A campaign has also been launched by the local Green Party, however the Department for Transport (DfT) says they are dedicated to cutting emissions and reducing air pollution by introducing clean air zones and encouraging motorists towards low-emission vehicles.
Please click here for more information regarding our car leasing services.