New 'funnel bins' to be trialled at Lymm services in Cheshire

In an effort to clean up Britain’s roads, motorists are being urged to throw their rubbish out of the car window and into a ‘funnel bin’.
Lymm services on the M6 in Cheshire is where the new orange bins will be trialled first this week, with 24 other service areas in the Northwest to follow suit.
Highways England hope the new ‘funnel bins’ will reduce the amount of rubbish on UK roads and encourage motorists to get rid of their waste by using these brightly coloured roadside bins. 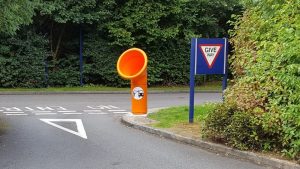 New ‘funnel bins’ like this one at Winchester services to be trialled at Lymm services in Cheshire © Photo: David Harris

According to Highways England, who are a government-owned company, an alarming 200,000 sacks of litter are removed from the side of Britain’s motorways every year and the weight equates to a massive 7,500 tonnes.
During a recent survey, one in seven drivers confessed to throwing rubbish out of their vehicle over the last four weeks.
Highways England hope their new funnel style bins will encourage motorists to throw their litter into them without the need to get out of their vehicle.
According to sources, if the trial is successful, Highways England will install their brightly coloured funnel bins in other areas of the UK.
The agency is optimistic about the new system following positive results when the same bins were trialled at Winchester services in Hampshire in 2016 and roadside litter was reduced by an impressive 25%.
“The funnel bins make it easier for drivers to dispose of their litter responsibly without the need to get out of their vehicles,” said a spokesperson for Highways England.
However, the bins have been slated as a bad idea by the founder of Clean up Britain, Mr John Read, who says the habit of throwing rubbish out of a vehicle’s window needs to be stopped, not encouraged by providing a funnel bin for motorists to use.
Keep Britain Tidy claim that cleaning up roadside litter costs taxpayer’s over £8million each year.