As the month of September rolls on with the new ’68’ number plate now adorning all brand new cars, the DVLA can now reveal some of the number plates they’ve had to ban from UK roads for being too rude, silly or offensive.

The Driver and Vehicle Licencing Agency (DVLA) have to gather a team together every March and September, when the number plates are set to change over, to go through every possible number/letter combinations and work out which ones could be deemed as not suitable to be seen on UK roads. 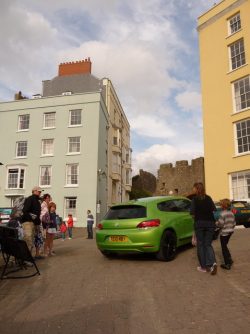 This car is in Tenby and has the registration TE10 NBY. © Copyright Chris Downer and licensed for reuse under this Creative Commons Licence.

The September change over to the ’68’ number plate has brought with it a bumper crop of potentially offensive plates, as the number ‘6’ can quite easily be turned into a ‘G’, whilst the ‘8’ can look very much like a ‘B’.

Any number plate that could suggest sexism, racism, homophobia, or have a political, religious or criminal angle such as ‘MU68 GER’ or ‘EU68 BAD’ are banned by the DVLA so as not to cause offence to anyone.

Some other number plates banned this September by the DVLA include ‘BA68 TRD’, ‘BL68 JOB’, ‘CA68 OMB’ and ‘DO68 GER’. The DVLA automatically exclude any number plate that includes the words BUM, SEX or WNK for being too rude.

All sensitive plates such as ‘AD13 CTS’ are also banned by the DVLA, plus anything that ends in BNP are prevented from being used.

Once the DVLA bans a number plate for being in poor taste it remains on the banned list for ever and if one manages to slip through the net, the DVLA has the power to take it off the owner.

Personalised number plates are enjoyed by many drivers in the UK, with more than 50 million combinations at their disposal at a start price of just £250.

However, a spokesperson for the DVLA cautioned: “The Agency holds back any combinations that may cause offence, embarrassment or are in poor taste.”