Ignoring motorway gantry signs is against the law and extremely dangerous

According to reports, from next year motorists could face hefty fines and penalty points on their driving licence if caught ignoring the red ‘X’ overhead motorway signs.
Drivers who continue to flout the law and use the hard shoulder when the signs above clearly say it’s closed could be issued with a penalty.
The new ruling comes after a campaign in which 50,000 motorists received a warning letter from Highways England for disobeying the rules on smart motorways – one third of the letters were sent to drivers who had ignored the red ‘X’ sign which lights up on the overhead gantries to inform motorists that the lane is not in use. 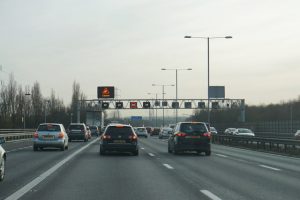 “Driving on a smart motorway lane that has been closed by a red ‘X’ sign is extremely dangerous. It is incredibly frustrating for law-abiding drivers to see others flouting red ‘X’ signs and those ignoring them are a danger to themselves and others,” said the RAC.
The RAC think it’s right that those caught ignoring the red ‘X’ are punished with a hefty fine and points on their licence in a bid to try and get the message across to drivers that ignoring the signs is not only wrong but potentially dangerous.
Concerns have been raised about motorists flouting the laws on smart motorways, with some drivers simply ignoring the signs altogether and only moving from the lane as late as possible.
Ignoring the signs is unacceptable, even those drivers who haven’t experienced smart motorways have no excuse as “the electronic signage on each section makes it very clear whether a lane is open or closed and what speed limit is applicable.”
More details regarding the new £100 fines and penalty points are expected to be announced by the Department for Transport (DfT) before the new ruling is introduced sometime in early 2018.