New data released by the DVLA shows that Manchester has fewer cars per head of population than any other city in the UK outside of the capital.

The data revealed that there are 141,797 cars registered at addresses across Manchester, where there’s a mixed population of 530,292 men, women and children – this equates to 0.27 cars per head. 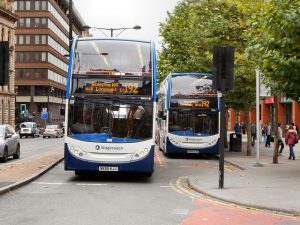 Three of the UK’s top major cities which were found to have more cars per head of population than Manchester were Birmingham, with 0.53 cars per head, followed by Leeds at 0.44 and Glasgow at 0.37 cars per head.

The explanation as to why Manchester has fewer cars per head could be down to the fact that the city has a densely-packed population and a somewhat comprehensive public transport network.

However, what it does show is that residents in the city of Manchester rely heavily on trains, buses and trams.

Other cities and towns with the fewest cars per head after Manchester were Nottingham at 0.28, Liverpool with 0.29, Cambridge and Oxford both on 0.30, Newcastle at 0.31 and the seaside town of Brighton at 0.32 cars.

Together with London, Tower Hamlets had the fewest cars per head, with 42,514 registered to the 295,236 residents living in the area – this equates to only 0.14 cars per person.

What this means for the town, is that there are literally more cars than there are people!

The reason for this rather high figure could be down to the number of company cars registered by the many businesses based in Slough.