Do you know what the symbols mean when they pop up in your car?

According to a new survey carried out by the Accident Advice Helpline, nine out of 10 motorists in the UK have no idea what the symbols appearing on their vehicle’s dashboard actually mean.
A worrying result, as this could mean the difference between a carefree journey and a huge repair bill.
The symbols that flash and light up on our car dashboard are there to give us an indication as to a potential issue with our vehicle and whether we need to take action to stop something catastrophic happening to our motor.
However, the survey suggests that many drivers in the UK haven’t got a clue what half of them actually mean and don’t recognise the symbol when it starts flashing before their eyes. 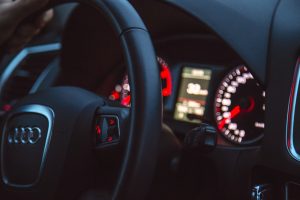 The survey found that one in three had no idea which symbol was the headlamp indicator, whilst 27% didn’t recognise the ‘check engine’ symbol.
The study questioned 2,000 drivers in the UK and discovered that when a motorists did know what their car was trying to tell them, not many actually knew how to deal with the problem by themselves.
A staggering 44% of those taking part in the survey had no idea how to change their car windscreen wipers, two thirds didn’t know how to check the oil and just below half hadn’t a clue how to change a tyre.
And when it comes to knowing what the legal requirements are regarding tyre thread, 58% admitted to having no idea regarding the rules or even how to check their own tyres.
Spokesman for Accident Advice Helpline, David Carter, said: “It’s worrying how little drivers know about their own cars. Knowing the meaning of a dashboard symbol on your car could be the difference between having an accident or not.”
According to the survey, just 16% of those taking part would know how to deal with an issue on their vehicle themselves.
Less than half said they would check online if a symbol on their car dashboard started to flash that they didn’t recognise, whilst 3% said they would carry on driving their car despite flashing lights appearing until they felt it was no longer safe enough to ignore it.
An alarming 25% of those questioned confessed that when it comes to car maintenance, they do leave it later than they should before booking their vehicle in for its MoT – 18% of these only took their car in 16 days after their MoT test was due!
And the main reasons they gave for missing their MoT renewal date was not having enough money to pay for it, feeling happy with how the car was running or simply just forgetting.

Please click here for more information regarding our car leasing services and special deals, or give us a call on 0800 311 8290.