Highways England have introduced bikes onto UK motorways for the first time ever to help stricken motorists who’ve run out of fuel.
The so called ‘fuel bikes’ can reach stranded motorists much quicker and help to keep traffic flowing.
According to Highways England, in the space of two months, 17 drivers in the UK have run out of fuel on major sections of motorway undergoing roadworks, causing massive trailbacks as a result.
Their rapid-assistance motorcycles carry emergency fuel and can get to a stranded motorists in quick time, sending them on their way without causing disruption and chaos to other road users. 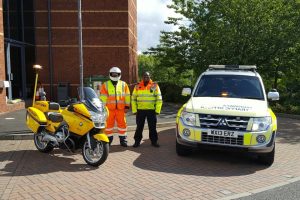 The ‘fuel bikes’ are currently in use on the M5 Oldbury Viaduct roadworks section in the West Midlands, where both carriageways have been reduced to two narrow lanes and a 30mph speed limit – the repair scheme is set to cost £100 million.
Project manager for Highways England, Alastair Warnes, said: “Since the contraflow came into effect, we’ve already seen a number of fuel-related breakdowns in the roadworks section.”
Mr Warnes said a motorists broke down on the very first day the contraflow came into effect and they’d simply run out of fuel, so by introducing this kind of assistance to stricken motorists, other drivers travelling through the roadworks won’t have their journey disrupted.
However, Mr Warnes did say that motorists should remember to make sure they have enough fuel for the journey before they depart.
Roadworks at the M5 Oldbury Viaduct are set to continue until autumn next year, whilst minor work will carry on until spring 2019.

For more information regarding our car leasing services and special deals please click here, or call us now on 0800 311 8290.