Ever visited a cheap hand car wash in the past?

Lawmakers in the UK are to investigate hand car wash businesses over slavery and abuse claims.
Unregulated sites are popping up around the country and it’s believed that thousands of workers in the business are thought to be slaves.
It’s estimated there’s at least 20,000 hand car washes in the UK and a committee of lawmakers have said that the investigation will look at how many of them have exploited or trafficked workers working among them.
Most of the workers are thought to be males from Eastern Europe who have their documents taken from them, suffer from abuse and violence, are made to work in unsafe conditions, trapped in debt bondage and subjected to threats. 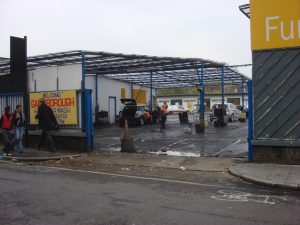 Hand car wash businesses in the UK to be investigated over slavery and abuse claims © Copyright Oxyman and licensed for reuse under this Creative Commons Licence.

Police forces in the UK believe that many thousands of people living in the UK could be victims of modern day slavery.
The anti-slavery agency and chief in the UK voiced their concerns in 2017, claiming that hand car washes were becoming a hub for illegal forced labour.
These hand car washes will clean your car for the cheap price of £5, much cheaper than going to an automated service, with more and more cropping up all over the country.
“We are concerned about the cost to the public purse of tackling criminality (at hand car washes), including trafficking, tax evasion and enforcement of minimum wage law,” said Mary Creagh, chair of the Environmental Audit Committee, adding: “(Our inquiry) will ask the government how it is meeting its commitments under the UN Sustainable Development Goals to reduce human exploitation.”
The investigation will also include taking a look at the environmental impact that hand car washes may have.
According to Dawn Frazer of the Car Wash Advisory Service, just 1,000 hand car wash businesses in the UK have any regulatory requirements in place, with a good number of staff members only being paid below the minimum wage, normally in cash and many of the workers have no idea what their rights are.
The charity Unseen claims that most forced labour cases received last year by the UK’s modern slavery helpline were related to car washes and make up around a quarter of the 700 cases which were reported in 2017.

For more information regarding our car leasing services and fantastic deals please click here, or give us a call NOW on 0800 311 8290.