Ever thought about buying your own car parking space?

Finding a parking space is often difficult, so have you ever considered buying your very own parking bay?
A number of motorists in the UK have taken the plunge and splashed out on their own parking space, with one bay selling recently for £40,000.

The parking space in St Ives, Cornwall had a guide price of £30-40,000 and managed to sell for its top end figure. The parking space never even went to auction as the buyer “was very keen to secure the spot and made a bid which was accepted prior to the auction.” 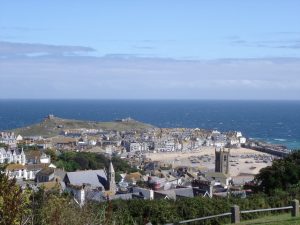 A parking space in St Ives Cornwall sold recently for £40,000 © Copyright Ian Cunliffe and licensed for reuse under this Creative Commons Licence.

The space in the beautiful coastal town of St Ives has a 999-year lease and will cost the new owner £4,329 per square metre, working out at twice the amount a house in Cornwall costs per square metre!

The parking space might only measure 4.4 by 2.1 metres but it will provide its new owner with “easy year-round and secure parking with access to the town centre, and thereby its picturesque beach and harbour.”

In Kensington however, one parking space back in 2014 had a price tag 10 times the amount of the St Ives bay, asking for £400,000 to own a small space in west London.

The space might be 10 times the price but is large enough to fit three cars, is located underground and situated right next to the Royal Albert Hall.

In Islington there’s a spot for sale at £120,000 – the price does buy you three parking spaces located in a secure underground car park that’s gated though. The space only measures 4.57 x 2.44 metres but boasts a double-height lift system which allows for three cars to be parked double-decker style.

The biggest bargain when you compare it to some of the above can be found in Basildon, Essex. For £400,000 you can purchase a complete car park for the same price of one parking bay in Kensington, west London. On the upside, there’s 91 parking spaces, however on the downside, the car park is located near to Basildon’s business parks rather than being close to the high street.