Drivers are being urged to slow down when passing breakdowns following a serious incident in which an RAC van was hit by another vehicle whilst attending a breakdown.
The accident happened on the westbound hard shoulder of the M4 near Swindon on the evening of Thursday 23 November.
The RAC have released photographs of the smash which left one of their vans a total right-off, luckily nobody was serious injured or killed. 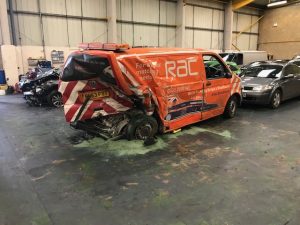 This year, there’s been two motorway fatalities of roadside operatives, one occurred on the M25 and the other on the M69. This more recent accident just shows how dangerous a job it is for roadside operators who attend breakdowns on the motorway.
Following the serious accident, the RAC has decided to launch a campaign asking for drivers to slow down when approaching a breakdown assisted incident and to leave a bigger gap between their car and all vehicles and people on the hard shoulder or in an emergency refuge area.
“The RAC is calling on drivers to ‘slow down, make space and move on’ when passing motorway breakdowns, leaving plenty of space between their car and any vehicles and people on the hard shoulder,” said RAC health and safety consultant Steve Robinson.
During this more recent incident, roadside operator Andrew Barrett was attending to a car that had suffered a puncture on the hard shoulder of the M4.
Whilst Mr Barrett was changing the wheel on the off-side of the vehicle, another car which was travelling at speed smashed into his RAC patrol van.
The vehicle was hit with such force that it rolled and was pushed along the hard shoulder. Mr Barrett was hit on the head and knocked unconscious as he tried to get out of the way.
The driver of the car which hit the RAC patrol vehicle managed to climb out of his vehicle and was not seriously injured. The police and emergency services were alerted and the road was closed for one and a half hours whilst the damaged vehicle was removed.
“This was a major accident. It is a wonder that nobody was killed. This incident serves to show how dangerous it can be for anyone who has to stop on the hard shoulder of a busy motorway. We have released these shocking photographs of the RAC patrol van as they clearly demonstrate the need for a new way of thinking when drivers encounter stricken motorists and breakdown operators at the roadside,” said Steve Robinson.

For more information regarding our car leasing services and fantastic deals please click here, or call us today on 0800 311 8290.