In the past three years, over 1 million foreign drivers have failed to pay the Dart Charge

New figures have been revealed showing how foreign drivers are failing to pay the toll at the Dartford Crossing, which has cost taxpayers in the UK around £81 million.
Over the past three years, a colossal 1,160,000 fines for not paying the Dart Charge have been passed over to the European debt recovery agency.
The payment system at the crossing was changed back in 2014 to help ease congestion and provide a more steady flow of traffic.
The Dartford Crossing/Tunnel connects Kent and Essex and previously drivers coming from either end to cross over the bridge or travel under the tunnel had to stop at a booth to make a payment. 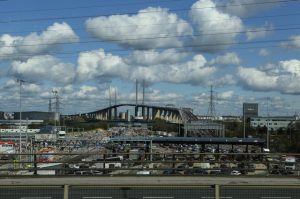 Drivers from abroad are failing to pay the toll for the Dartford Crossing © Copyright Martin Addison and licensed for reuse under this Creative Commons Licence.

The new Dart Charge has now superseded the booths and motorists have to either set up a pre-paid online account or pay a one-off toll charge on their payment website by midnight the following day.
Tolls charges vary depending on the type of vehicle; for cars it’s £2.50, goods vehicles pay £3 and heavy goods vehicles are charged £6.
Failure to pay the Dart Charge can result in a £70 fine which has to be paid within 28 days but if the fine is paid within 14 days, it’s halved. If a driver chooses to ignore the fine they could see the charge increased to £108.
The Conservative MP for Dartford, in Kent, Mr Gareth Johnson, is urging authorities to confiscate the vehicle of those failing to pay for the crossing, saying: “It is simply unfair for some people to be able to get away without paying for the toll.”
Others including motoring lawyer Nick Freeman, have accused the Government of being ‘soft and stupid’ regarding the debt now outstanding for unpaid Debt Charge payments.
“The point is there are millions and millions of foreign drivers who come over to this country and they pay nothing to use our roads. We go abroad, we have to pay,” said Mr Freeman.
According to Highways England, unpaid fines related to drivers from abroad were being chased up and claim the number of foreign drivers dodging the toll only makes up less than 1% of overall crossings.

For more information regarding our car leasing services and special deals please click here, or call us today on 0800 311 8290.