The most dangerous hard shoulders on Britain’s motorways revealed

The Department for Transport’s (DfT) recent stats have found that the M6 has the most dangerous hard shoulder in Britain – however, the motorway is more dangerous because large parts of it don’t have a hard shoulder any more.

According to their figures, 403 accidents were reported as occurring on motorway hard shoulders in the UK from 2011 to 2016.

What’s slightly concerning is that many of the roads that have landed in the top 10 list, like the M6, have been turned into ‘smart motorways’ – meaning the hard shoulder is opened up for traffic to use, leaving motorists with only the emergency refuge areas to pull into which are deemed to increase the risk of accidents by 200%, says the RAC. 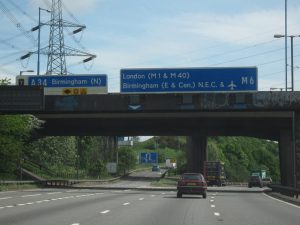 The most dangerous hard shoulders on Britain’s motorways revealed and top of the list is the M6 © Copyright Roy Hughes and licensed for reuse under this Creative Commons Licence.

Figures revealed by 24/7 Vehicle Rescue found that of the 403 accidents reported during the five years from 2011-2016, 56 of them happened on the M6, which equates to 14% of all hard shoulder accidents in the UK.

These have occurred despite the M6 having large areas of ‘smart motorway’ between junction 4 and 13, with ‘all lane running’ and ‘dynamic hard shoulders’ – so there’s no hard shoulder whatsoever for drivers to use, making it more dangerous if their vehicle suddenly decides to break down.

Out of the top 10 most dangerous motorway hard shoulders according to DfT stats, seven of them have sections of smart motorway in use, so no hard shoulder is available to use or it’s used as an extra driving lane if traffic builds up.

The top 10 most dangerous motorway hard shoulders in the UK are:

To help reduce congestion and improve traffic flow, plans are underway to turn around 300 miles of the UK’s motorway network into smart motorways by 2021.

Emergency refuge areas have to be no more than 300 feet long and positioned along a stretch of motorway every 1.6 miles but according to RAC, these refuge areas are 200% more dangerous than hard shoulders.

Edmund King, President of the AA believes there should be at least twice as many emergency refuge areas, whilst in a recent survey carried out by the British motoring association, 79% of the 20,000 motorists questioned thought the loss of hard shoulders on UK motorways have made them less safe.

Out of the 403 hard shoulder accidents, 70% of the collisions had happened because of a vehicle coming to a stand-still on the hard shoulder.

Another 63 accidents occurred when a vehicle entered the hard shoulder or a lay-by, whilst 55 happened as a vehicle drove away.

As a result of these figures, 38 of the collisions were fatal, which equates to around 8.5% of all fatal accidents on motorways in the UK over a five year period.

24/7 Vehicle Rescue and other road safety groups have warned motorists that staying inside a broken down vehicle on the motorway can increase the risk of serious injury or death and advises drivers to get out of the car immediately on the safe side of the road and stand as far back as possible over the barriers until help arrives.