And the model taking the glory was a blue Golf GTE

Celebrations were underway last week at Volkswagen, as they revealed their 150 millionth car had just come off the production line and the model taking the glory was a blue Golf GTE.
The German automaker’s began making cars back in 1937, with the Volkswagen Type 1 Beetle the first of their cars to be introduced to the people – Volkswagen in German actually means “people’s car”.
The VW Golf was first launched back in 1974 and since then, 34 million of them have been built – so it seems right and fitting that the 150 millionth to be produced was a Golf GTE in blue. 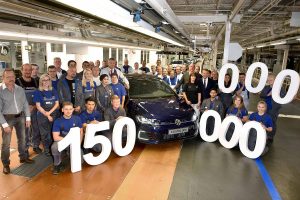 It was assembled at the company’s Wolfsburg factory in Germany, however VW now have over 50 factories spread across 14 countries, which probably contributed to the company reaching its 150,000,000th car in just 80 years.
The main factory in Wolfsburg has itself produced 44 million Volkswagen’s and the company boasts other long-running models in its line-up with healthy numbers, including 20 million VW Passat’s, 19.5 million VW Jetta’s and 17 million VW Polo’s.
Their factory in Mexico stopped producing cars back in 2013 but the company said the total production of their original Beetle had crept up to 21.5 million.
A presentation was organised by the bosses, taking place on the production line at their main headquarters in Wolfsburg and CEO Herbert Diess was in attendance.
“I see the 150 millionth Volkswagen as an incentive to do everything to ensure a good future for Volkswagen,” said Mr Diess.
The company is now concentrating on the electric vehicle market and 2020 should be the year we see the first Volkswagen electric vehicle on our roads, with big plans to hit the 1 million mark for EV’s by the year 2025.
In the mean time, VW is launching 10 new cars this year and claims they will have a grand total of 19 new SUV’s on offer by 2020.