In 2017, Shell unveiled their new app-based payment system called Shell Fill Up & Go, which allows customers to use their smartphone to go through the filling up process and now BP have joined them in offering a similar kind of service.
BP’s app-based payment technology is called BPme and is already up and running at more than 500 of their filling stations in the UK. The company is planning a nationwide rollout by spring this year.
Rather than the customer having to go inside the filling station shop to pay for their fuel, or mess around with a pay-at-pump service, the BPme technology offers a hands-free payment option via the app.
Before having to get out of the vehicle, customers can use the app to select which pump they’re at, wait for a ‘Start Fuelling’ dialogue to begin and only at this point do they leave the car to fill up as directed, leaving the phone in the vehicle! 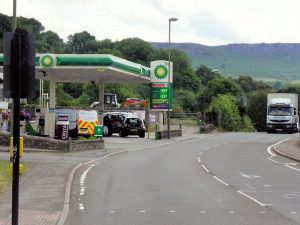 BP now offer customers the chance to pay using their smartphone via an app called BPme © Copyright David Dixon and licensed for reuse under this Creative Commons Licence.

According to BP, the app will “give our customers a little bit of time back” and for parents with small children in the car, the app means they don’t have to go inside to pay anymore, taking the worry out of leaving them alone.
The app is available to both Android and Apple iOS users and works by storing a customer’s payment card details, plus Nectar card details also if desired.
Drivers will be able to locate the nearest BP filling station via the app and can send them to it by using a navigation app such as Waze. According to BP, the app will work even if a 3G signal is the only option available to a customer.
The company also confirmed that BPme has been designed to minimise data and battery usage, as well as only being able to be used inside a vehicle for safety reasons.
Currently, smartphones are not allowed to be used outside of vehicles on BP filling station forecourts but bosses at the company hinted that this could change in the future.
Most filling stations in the UK prohibit the use of mobile phones whilst filling up at the pumps and if caught, you could find the fuel pump you’re using cut off and probably given a good ticking off too.

For more information regarding our car leasing services and special deals please click here, or give us a call NOW on 0800 311 8290.