BMW revealed as the most desired car brand in Great Britain..

but it’s Toyota who come out on top globally!

The most desired car brand in the UK is… the BMW, as confirmed by analysis of Google data.
Despite BMW taking the most coveted crown in the UK, Japanese car manufacturers Toyota have come out on top as the most sought after car brand in the world, with the highest searches for a staggering 74 different countries.
The news will be most welcomed by Toyota, after it was announced recently that their four-year reign as the world’s top selling car-maker had been lost to Volkswagen. 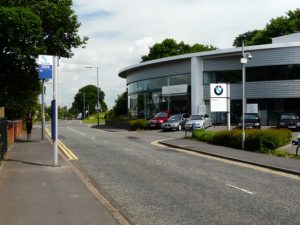 BMW revealed as the most desired car brand in Great Britain.. © Copyright Graham Taylor and licensed for reuse under this Creative Commons Licence

But what was most surprising is the fact that people were more likely to search on Google for BMWs, who came second behind Toyota, rather than any models manufactured by Volkswagen.
The BMW brand was not only the most coveted car in the UK but in 51 other countries also.
Third on the overall search list was Hyundai – people in 17 countries searched for Hyundai over any other brand.
Toyota, BMW and Hyundai – the top three highest searched for car brands (on Google) when combined together – accounted for nearly three quarters of all online searches for cars all over the world.
Despite being popular around the globe, Ford did not appear once as the most searched for brand on Google in any country.
The information was gathered by the UK’s biggest multi-franchise car parts distributor, Quickco, who challenged their web team to come up with finding out the brand of cars that people across the world searched for the most on Google during the past year.
The Quickco web team observed 193 countries, where they could acquire data to look for search patterns and trends.
What the data did uncover was that there seemed to be limited ‘country brand loyalty’ when it came to people looking online for a new car.
The only countries with their own brand appearing at the top of people’s online searches were France (Renault), Germany (BMW), Italy (Fiat) and Sweden (Volvo.)
The South Korean car brand Hyundai, along with Japan and its Honda, Suzuki and Toyota home-grown car brands, saw their search crowns going to the Brit’s favourite.
The most searched for brand in the USA was Toyota – quite a shock and somewhat ironic, as the most searched for car brand in Argentina, Chile, Colombia, Ecuador and Mexico was an American brand – the Chevrolet!
To find out more about Flexed.co.uk’s car leasing services, please click here.