Are you a big fan of James Bond with a big bank balance too?

If so, you might be in the market for one of the 28 James Bond cars that Aston Martin are going to make – only £3.3million each!

Aston Martin have confirmed their intention to recreate the ‘iconic’ DB5 car made famous in the James Bond movie Goldfinger.

The car will be built in Newport Pagnell, Buckinghamshire, where it was originally made back in 1963 and will include revolving number plates as well as other gadgets.

Twenty-five of the cars will be produced by Aston Martin and EON Productions, with a price of £2.75m plus taxes – even though they won’t actually be road legal!

A further three more of the cars will be built but one each will be kept by Aston Martin and EON, whilst the third one will be auctioned off for charity. 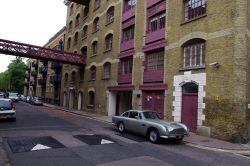 A DB5 as driven by James Bond parked up on Wapping High Street, London. © Copyright Chris Talbot and licensed for reuse under this Creative Commons Licence.

The DB5 has been described by Aston Martin as “the most instantly recognisable car of all-time”, featuring for the first time in the Goldfinger movie back in 1964 and then in a further six more James Bond films.

A number of gadgets will be included in the new models, which are to be co-developed by Chris Corbould OBE – James Bond special effects supervisor and Oscar-winner.

After tax, each of the cars will cost £3.3m and all of them are to be painted the same colour (Silver Birch) as the one that appeared in the movies.

“It is remarkable that the DB5 remains the definitive James Bond car after so many years,” said Andy Palmer, president and CEO at Aston Martin, adding: “To own an Aston Martin has long been an aspiration for James Bond fans, but to own a Silver Birch DB5, complete with gadgets and built to the highest standards in the very same factory as the original James Bond cars? Well, that is surely the ultimate collectors’ fantasy.”

It’s expected that the first customer delivery of the recreated DB5 Goldfinger car will happen in 2020.