Airports in the UK increase parking prices in time for summer

A number of airports in the UK have increased their parking fees for picking up or dropping off passengers just in time for this summer, when more and more people will be jetting off to far away destinations.

According to analysis by the RAC, the most expensive is still London Luton and the airport which has increased its prices the most. Motorists now have to pay an extra £1 for picking someone up, meaning they now have to fork out £8 yet the stay time has decreased by 10 minutes, to 30 minutes.

For anyone picking someone up at London Luton, the cost for a 1 to 2 hour stay will set them back a whopping £17, so watch out for flight delays. 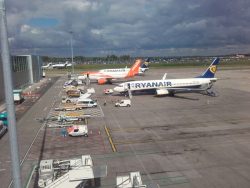 Airports in the UK increase parking prices in time for summer

The second most expensive is London Stansted, where motorists have to pay £5.50 for a 30 minute stay, whilst drivers in Birmingham have to fork out £5.10 for a 1 hour stay.

At Edinburgh however, motorists are charged a more acceptable £4 but only given 15 minutes to pick someone up, other wise a further £3 for a 1 hour stay is required.

Drop off’s don’t fair much better either, as some airports continue to charge people way too much for simply pulling over and letting friends or family out of the vehicle.

At London Stansted, motorists are charged £3.50 for a mere 10 minutes, whilst at Manchester you’ll be charged £3 but only allowed 5 minutes to kiss and drop someone off.

A 10 minute drop off at London Luton costs £3, whilst at Liverpool John Lennon motorists are charged £3 for 20 minutes.

And according to the RAC, even after having to pay these charges some airports including East Midlands, London Luton and London Stansted continue to charge £1 a minute if you overstay your welcome!

There are a handful of airports though who don’t charge people for dropping off passengers including Cardiff, London City, London Heathrow and London Gatwick.

RAC spokesperson Rod Dennis said: “As we enter the summer holiday season, the UK’s airports are about to see some of their busiest weeks of the year,” adding: “With thousands of motorists driving to airports to pick up and drop off friends and family members many will unfortunately find themselves shocked by some of the extortionate parking tariffs operated by some airports.”

Please click here to find out more about our business/personal car leasing services and fantastic deals, or give us a call NOW on 0800 311 8290.