If You Love Driving A Car, You’ll Love These Facts For Sure!

Motorists in the UK love their cars and it’s fair to say, that people all over the world do too. Like our pets, they become part of the family – they take us here, there and everywhere we need to go, we wash them regularly to keep them in tip-top condition and some of us even give our beloved car a ‘pet name’, which according to a survey conducted recently, the most popular nickname given to cars here in the UK is Betty!

We take our cars for granted, jumping in them every day and relying on them to get us from A to B.

So, to show some appreciation for the wonderful car and to celebrate it being most people’s favourite form of transport, we’ve found 10 fun and interesting car facts that you might not know but should.

1.  The Man Who Invented Cruise Control Was Blind – it’s hard to believe but it’s true! Ralph Teetor (17 August 1890 – 15 February 1982) from the U.S became blind at the age of 5 in an accident but this didn’t stop him from graduating from the University of Pennsylvania with a degree in mechanical engineering in 1912.

He invented cruise control after travelling in a car with his lawyer, who would slow down when talking and speed up when listening. Apparently, the rocking motion irritated him so much, he decided to invent a speed control device.

2.  The SSC Tuatara is Currently the Fastest Production Car in The World – it boasts an officially recognised top speed of 316.11mph.

The 1,750bhp SSC Tuatara claimed its crown as the world’s fastest car in October 2020 in Nevada, America. This amazing American hypercar in fact managed a speed of 331.5mph in one direction and a 304.77mph run in the other direction.

4.  The World’s Most Expensive Speeding Ticket Is For… $290,000 – WOW! This was handed out to a motorist driving in Switzerland, who was caught doing 35mph over the speed limit as he blasted through a small village in his red Ferrari Testarossa.

The fine was so high because in Switzerland, your fine is calculated according to your earnings and this guy was reported to have an estimated net worth of $22.7 million dollars, plus he was a repeat offender. 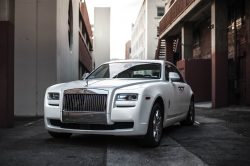 Around 65% of all Rolls-Royce cars are still on the roads today!!

5.  Around 65% of All Rolls-Royce Cars Are Still on The Road – this is amazing and a real tribute to how well they’re made.

Rolls-Royce are known for their superior build quality and produce cars that are luxurious, stylish and extremely well-made, that’s why at least 65% of them are still operational and on the roads today.

6.  The Average Car Contains Over 30,000 Unique Parts – if you count down every part to the smallest nuts, bolts and screws, this is how many parts the average car contains and it’s mind-blowing!

With so many parts going into just one single car alone, it’s a miracle that they don’t break down more often!

7.  It Would Only Take a Month to Get to The Moon in a Car – blast off! If you travelled directly there, averaging 60mph all the way, you’d get there in less than a month.

Maybe it’s because there’d be no traffic jams or queues to deal with!

8.  The Name BMW Stands For ‘Bayerische Motoren Werke’, or ‘Bavarian Motor Works’ in English – we see these beautiful cars every day on our roads but I reckon most of us have no idea what BMW actually stands for, until now!

Based in Munich, Germany, every BMW vehicle carries the iconic BMW ‘Roundel’, an instantly recognisable blue and white design that’s a nod to its Bavarian roots.

9.  The Toyota Corolla is The Best Selling Car of All Time – over 43 million models have been sold since they first launched back in 1966.

It might not be the most exciting and it’s definitely not the best looking car to have ever graced our roads but it’s comfortable, practical, reliable and affordable.

10.  Windscreen Wipers Were Initially Considered a Distraction – what! They are now considered one of the most important parts of a car, wiping away rain and snow from our windscreens for a clear view as we drive along.

The Windshield Wiper was invented by Mary Elizabeth Anderson (19 February 1866 – 27 June 1953)  in 1902 and patented in 1903. She was an American real estate developer, rancher, viticulturist and inventor.

So there you have it, 10 fun and interesting car facts that you may or may not know about but should if you drive one every day. Here at Flexed, we love cars and specialise in short term car leases which allow you to lease your favourite car from anywhere between 28 days and 12 months or longer.

Please click here to find out more about our car leasing services and fantastic offers for both Business and Personal use, or give us a call TODAY on 0800 311 8290.